Please go through the lesson, making sure to click the green ‘completed’ button once you have read through the content.

Randomised Controlled Trials (RCT) can be used to provide sets of data that can be compared.

In a population, a group of eligible patients is randomised to one of the compared treatments (A or B).

Following a predefined duration of treatment the two groups are compared according to the chosen endpoint of the study.

Due to the randomisation of the treatments and the blinding of treatments, the difference observed between groups may be attributed to the allocated treatments.

Tests According to the Variable

The comparison occurring at the end of a study is based on a statistical test. According to the type of data, numerous tests have been developed.

Let’s have a look at three types of statistical tests: the Student t-test, the Ï‡2 test (chi2), and the Survival analysis.

In a phase II study, two formulations (A & B) of the same anti-hypertensive agent are compared.

On one hand there is a large overlap in the two individuals’ values, on the other hand, the Confidence Intervals seem distinguished. Therefore, prior to developing A rather than B, the investigators ask the statisticians if there is a true difference between the means.

The statisticians respond that they can only reply to the question, “Is the observed difference”: 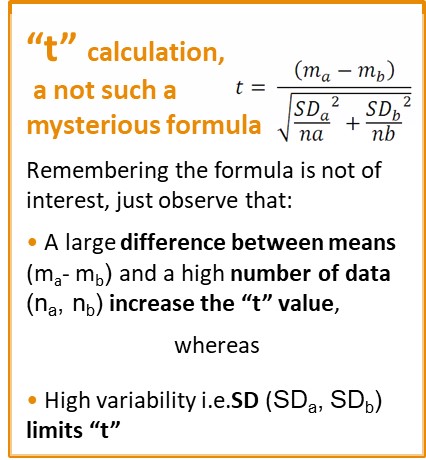 According to the data, the statisticians use the Student t-test and provide the results:

t is the result of the calculation the higher t, the weaker the random hypothesis,

d.f. degrees of freedom corresponds  to the number of values in the final calculation that are free to vary,

Usually, the limit of p<0.05 (5%) is considered statistically significant.

So, p<0.02 signifies that the probability that the observed difference would only be due to a random effect is less than 2%.

The difference between the two antihypertensive agents may be considered statistically significant and taken into account.

Unsurprisingly, the determination of the p-value, based on the t and d.f. values, is part of the Gaussian toolbox.

Some variables are binary (survivor/non-survivor; hospitalized/discharged). In other situations, a threshold may be chosen for a continuous variable, dividing the population into 2 subpopulations, over vs under the limit. For example, in order to compare the two anti-hypertensive formulations, another endpoint would be normalisation of the blood pressure defined as >13 cm Hg.

The question asked of the statisticians is:

Is the observed difference between [arms]:

The Ï‡2 test name is linked to the shape of the Greek  letter Ï‡ which graphically illustrates the concept of crossed comparison.  The test passes when one arm of the cross prevails in terms of number of subject.

In some situations, it is interesting to follow the evolution of the endpoint among the participants. The first example of endpoint was the survival which gave its name to this type of analysis: Kaplan Meyer, or survival curves.

Each change in both groups is recorded at its time of occurrence. These methods consider the difference between arms globally on the whole period of study, rather than at a given time. 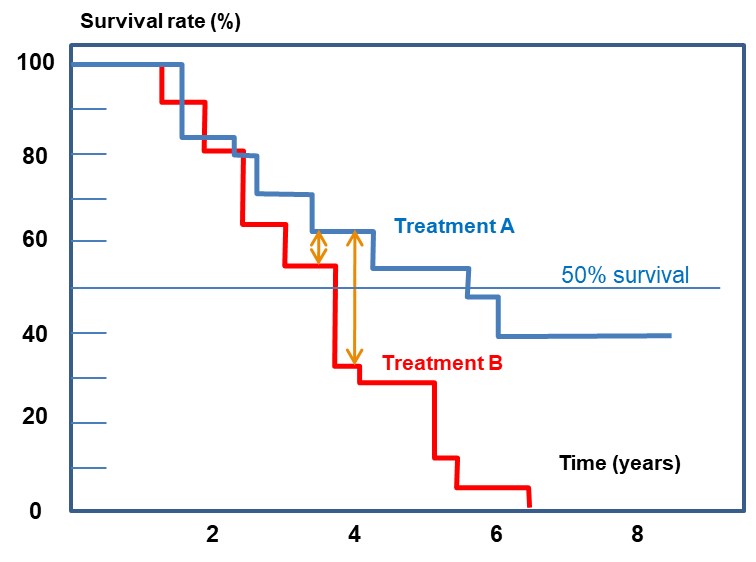 In the example above, treatments A and B  are compared in treatment of prostate cancer. Survival curves describe the outcome in the two arms.

Outcomes may be compared:

The calculation is done like a succession of  Ï‡2 tests performed at the time of each event, during the whole period of analysis.

By pooling all these observations, this method takes into account a larger amount of information compared to a single analysis at a given time, resulting in an increased power of conclusion 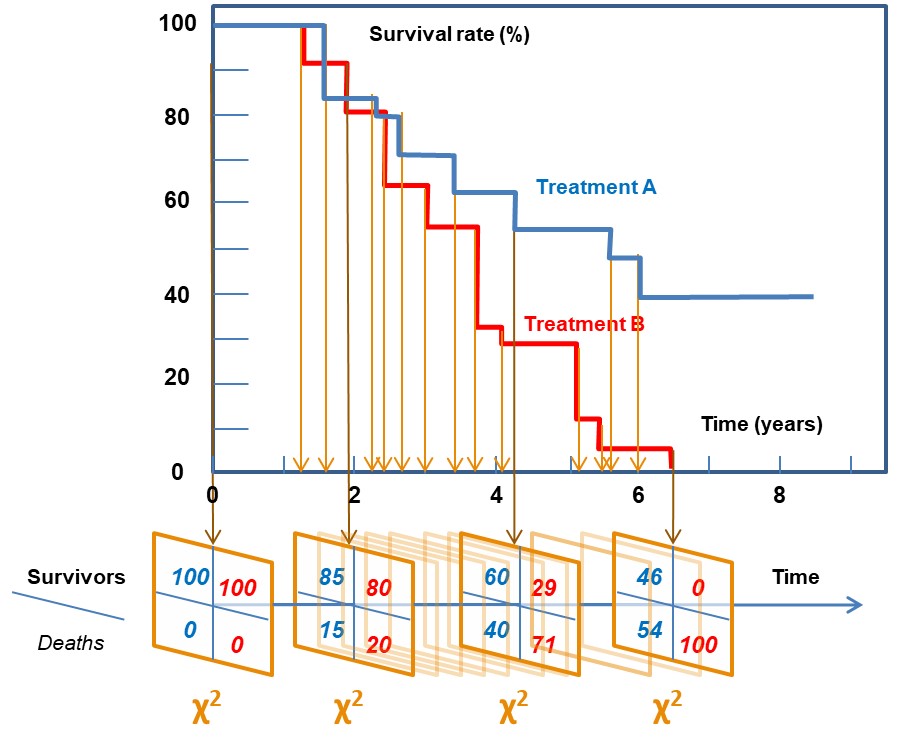 By comparing the former results of the comparison of 2 anti-hypertensive agents, there is an apparent discrepancy between the two whereas the data results from the same trial!

Q2: Which statistical test is reliable respectively for testing endpoints 1 and 2 ?

End point 2 for testing anti-hypertensive efficacy: Percentage of patients in which the systolic arterial pressure less than 13 cm Hg following a 3-month treatment.

The use of the endpoint 2 seems to result in a lower ability to conclude.

Q1: Is this difference in statistical power surprising? And if so, why?

Q2: Taking into account these statistical aspects, which endpoint will you use for comparing anti-hypertensive agents?

Q1: Is this difference in statistical power surprising? And if so, why?

Q2: Taking into account these statistical aspects, which endpoint will you use for comparing anti-hypertensive agents?

Is the treatment able to decrease systolic arterial pressure overall in a given population?

Is the treatment able to reach an individual clinical target: to lower the arterial pressure below a threshold defined as pathological?

The endpoint has to be chosen according to the more relevant question.

Endpoint 1 may be preferred to show the pharmacological activity of a compound in hypertensive patients.

Endpoint 2 may be preferred to test a new drug as first-line treatment for controlling arterial pressure below a critical value.

An interactive calculation tool for chi-square tests of goodness of fit and independence – Kristopher J. Preacher, University of Kansas Department of Psychology

The inclusion of Women in Clinical Trials: Are We Asking the Right Questions? Lippman, A. (2006). Toronto, ON: Women and Health Protection.